A hands-off and revolutionary approach to learning.

In Monday’s blog, I discussed the potential of online learning’s ability revolutionize traditional schooling and how blended learning models are helping us reimagine education. Despite criticisms that oppose online learnings’ accessibility factor, given that the majority of the world still does not have access to the internet—I am still fairly convinced that open online learning will be the schooling of the future.

The Ted2013 Prize winner, Dr. Sugata Mitra, highlights further arguments that bring education out of classrooms and lecture halls and into personal spaces composed of smaller groups, mediated by ‘moderators’ rather than organized by teachers— Self-Organized Learning Environments. An Educational Researcher at New Castle University who has studied educational practices for upwards of 30 years, Mitra’s Ted2013 wish is that together we “build the ultimate School in the Cloud where children, no matter how rich or poor, can engage and connect with information and mentoring online”.

How can Children Teach one another Biotechnology?

In 1999, Dr. Mitra began “Hole in the Wall” experiments to study the results of minimally invasive teaching methods. Mitra and his colleges did precisely what the experiment is titled and dug a hole in a wall of an urban slum in New Delhi to install internet-connected PC’s. With hidden camera’s rigged up, he left the station and watched as children worked together to learn how to operate a computer in a language foreign to their own. In only 8 hours, he watched as children began browsing the internet in English. Nine months later, Mitra returned to interview the children and was astonished with what he found. The first thing one young girl said to him is, “we want a faster processor and a better mouse”. The fact alone that they came to understand what a computer processor does amazes me. More profound though, is that in only 9 months’ time, the group of children developed English and computer skills to the standards of an office assistant.

In the next step of the experiment, Dr. Mitra attempted to destroy his own argument by creating a hypothesis that he thought would be impossible to prove. His hypothesis tested if Tamil speaking 12 year olds can learn the biotechnology of DNA replication in English by themselves from a street side computer. After dropping off the computer in the rural Tamil community, Dr. Mitra came back after two months and tested the children on DNA replication. He was not surprised when the students scored close to 0%. He then proceeded to ask them how long it took before they decided that they would not understand anything. To his surprise, one girl answered that they go on the computer many hours per day and in broken English/Tamil declared, “aside from the fact that improper replication of the DNA molecule results in disease, we haven’t understood anything!” 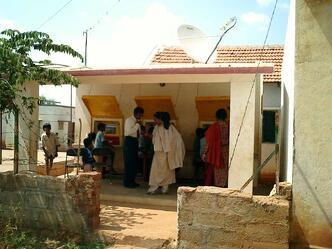 Dr. Mitra laughed and decided that they had learned something and after another series of tests discovered they had learned approximate 30% of the material. Since 30% was not a passing standard, he asked for the help of a 22 year old accountant whom watched over them outside of work hours. The account, whom has no prior experience with anything science related, was asked to use the ‘grandmother method’ and stand behind them responding with positive encouragement when they have discovered something new.

Two months later Dr. Mitra returned, retested the children and found that their test scores on biotechnology pushed past 50%.

Could it be that our children may not be attending school one day as the skills to excel in the job force no longer entail the basic skills that are learnt through formal education institutions? Sugata Mitra makes an excellent point, “we are moving towards a future where knowing is obsolete” given that information can be found online within minutes. To get there, we need to integrate obsolete knowing into the future and let our children learn and discover freely, rather than forcing them to learn through the outdated constructs we provide. Maybe one day, all children will need for 'school' is an internet connected computer, a few friends and an open source learning management system to provide them with suggested learning materials.

If you’re interested in implementing Self Organized Learning into your eLearning environments check out the SOLE Toolkit. Or, to learn more about Dr. Mitra's research, check out his TedTalk below.

Plan for Better Learner Engagement with a Well-Designed Student Survey

No other opinion is quite as valuable as that of your users.