Yesterday in our post about the 3 Trends Changing Learning we mirrored what many experts are saying about competency-based learning—that it is becoming an exemplary model for decreasing the cost of education, increasing student success and increasing the likelihood that students will be hired directly after degree completion. Today I’m going to delve deeper into the topic of competency-based learning to uncover what’s working and what critics are saying.

Why Competency Based Learning Works and Why Stakeholders Love it.

There are many stakeholders who benefit from competency based education but the ones we will focus on are the learners, education institutions and employers. Compared to the traditional education model that hasn’t budged in the past 500 years, competency based education (or learning) focuses on outcomes rather than time-bound curriculum targets. Also unlike the current learning model, competency based learning allows learners to advance at their own pace—only after they have mastered the learning outcome. Assessment and feedback occurs through the entire learning process so that the learner can truly emerge with a demonstrable competency once the skill or ability is mastered (see figure 1). 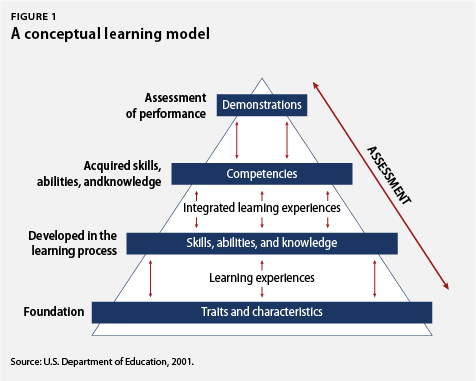 Since our brains develop at varying rates, in different ways at different times—competency base learning allows learners to achieve at their own pace with teaching techniques that cater to their specific needs. Some prime examples are currently coming out of the United States catalyzed by Obama’s administration mandate to provide grants to U.S. K-12 schools who want to experiment with this model. A low-income school in Lindsay, California is an exemplary case where competency based learning has drastically improved learning.

According to an article recently published article by the Wall Street Journal, pass rates, reading scores and math scores have been increasing since competency based learning was introduced in 2009. On the state Academic Performance Index, Linday’s score jumped from 644 to 691 over a 5-year period. Compared to statewide performance, this 47-point growth is huge considering the majority of schools only increased by 35-points. Not only is student performance increasing, but suspension rates have dropped by 41%!

With such outstanding results, it’s hard to imagine what naysayers might be critical about but there are definitely some good points brought up by key players.

Despite such amazing results, competency based learning raises some concerns. According to critics like Ann Marie Banfield from the conservative group, Cornerstone Action, parents have been making complaints about competency based education saying that it is too focused on applicable skills like collaboration and communication, and not enough focus on academic excellence. Others like Daria Hall, director of k-12 policy at Education Trust, worry that since learning happens at a pace set by the student, expectations of progression may be lower for low-income and minority students—thus widening the academic achievement gap. From the educators perspective, while they recognize that competency based learning improves student success; many are reluctant to implement this model because it increases their workload five-fold. Rather than coming prepared with a single daily lesson plan, teachers now need five in order to meet the competency progression of each student.

Plan for Better Learner Engagement with a Well-Designed Student Survey

No other opinion is quite as valuable as that of your users.