Transform your eLearning into a revenue-generating asset with an all-in-one solution that is easy to use, cost-effective, scalable, and feature-rich.

Optimize the impact and ROI of your eLearning with complete access to your learning and business data.

Effective and efficient eLearning solutions that fit your budget

Leave no student behind, increase lesson effectiveness, and learning success

Flexible and robust training and certification to fit the strictest requirements

Your solution for the business of eLearning, complete with powerful eCommerce features and marketing functionality

Create the ideal eLearning environment with an open-source Learning Management System tailor-fit to meet your needs.

Prove and improve the impact of your eLearning with stunning visualizations and automated reporting to easily see and share the big picture with our award-winning analytics solution.

Master your eLearning and transform knowledge into your competitive advantage

Create a roadmap to maximize your eLearning revenue, efficiency, and effectiveness

Unite your systems for success to create the ideal eLearning environment

True Cloud Hosting for the best performance and tightest security 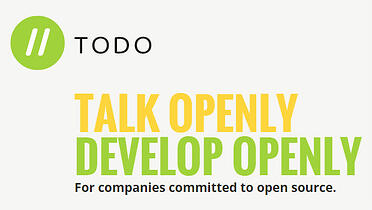 Last week the Talk Openly, Develop Openly (TODO) initiative was launched by a group of 10 leading technology firms including Google, Facebook, Twitter and Khan Academy. The TODO project is open to all members of the open source community and aims to work together to overcome the challenges of large and decentralized open source projects. If you are new to what open source is and why it is so powerful, let us briefly explain.

What is Open Source?

Whenever we explain open source to people, we love to use Wikipedia as an example. Wikipedia is a free encyclopedia with over 4.6 million English entries that are constantly being updated as new information develops. Without Wikipedia’s open and publicly accessible nature, it would have never grown to its height today. Wikipedia is one of the first examples of an open source initiative but now many others are embracing this concept to advance technology and development at record speeds. Essentially, open source projects embrace and celebrate:

One application of open source ideology that has really blown up is in the software world. Open source software allows anyone to enhance or modify the ‘source code’ of software so that programs or applications work in a different way. Moodle, for example, is an open source software that benefits form a worldwide community of developers who work together to upgrade the product every 6 months. What is absolutely amazing about this is that the community of developers is composed of people who actually use the learning management system on a daily basis. This means you are getting a product that is being consistently modified based about what users actually want, opposed to what a company thinks users want.

While the benefits reaped from massive open source projects are abundant, they definitely do not come without a unique set of challenges namely: guaranteeing high-quality and frequent product iterations, engaging and communicating with communities of developers, and effectively learning from and contributing to other open source projects. Think about how hard it is to coordinate and organize teams across a single organization in a single location. With open source initiatives, teams of developers are spread across different time zones, communicate in different languages and often have diverging views.

Given that many leading technology companies of today use open source projects to meet their strategic goals, an initiative like TODO makes perfect sense to address and overcome many of the aforementioned challenges of open source. It’s exciting to think about how much additional potential will be reached with open source software projects once we find a more efficient ways to organize these projects!

Where eLearning professionals go to find all the knowledge they need to deliver more effective online education and training:
View All